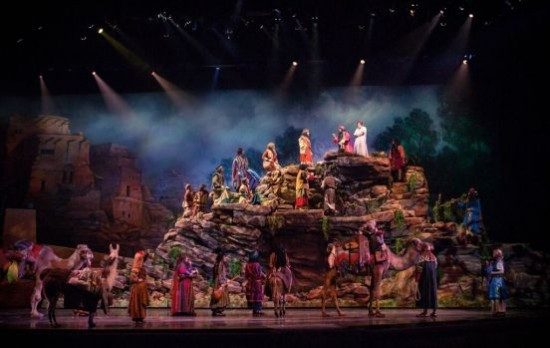 For those that need a quick refresher on the story, Joseph is one of Jacob’s twelve sons and is his favorite. The other brothers are jealous of Joseph’s talents and the fact that he has Jacob’s favor. Jacob has given Joseph a coat of many colors as a gift. Joseph constantly talks of the dreams he has and the brothers think he is a little insane. One day the brothers decide to make Joseph go away permanently and tell Jacob his son is dead. He is sold to an Ishmaelite and then to the well-to-do Mr. and Mrs. Potiphar. For being a slave he is actually treated quite well but Mrs. Potiphar is a bit of a drama queen so she accuses Joseph of sexual molestation after he does not succumb to her advances. He is thrown into a cell with other prisoners and thinks this is where he will be forever.

Pharaoh has heard about Joseph’s ability to interpret dreams and calls upon him to help interpret his own and then makes him a top advisor. Joseph tells Pharaoh a big famine will fall upon the land and when the brothers show up looking for grain, Joseph has to decide whether or not to forgive his brothers for what they had done to him. If you need any more plot, come see the show.