PPH IT Support Administrator Albert Eschert has always embodied the core values of PPH over the 16 years he has worked in the community, and that was never more apparent than it was on the morning of Jan. 11 as Albert was en route to PPH.

Albert, a Fishtown resident who commutes to and from PPH using the Market-Frankford Line, arrived at the Tioga Station early that morning and swiped his SEPTA TransPass, just as he does every workday. As he was walking to the platform where he would eventually board, he heard the screams of someone yelling for help.

A man had fallen onto the tracks but did not have enough strength to pull himself all the way up onto the platform. Albert ran up the crossover steps and down to the other side of the platform, put his coffee and workbag aside and sprang into action. 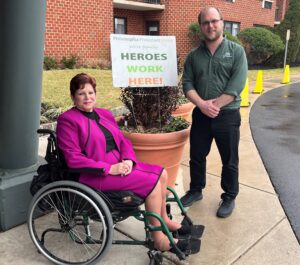 “You are truly a real hero,” said PA State Senator Tina Tartaglione on Feb. 23 in the PPH Social Hall when Albert was recognized for his actions that January morning.

Phil Grutzmacher from State Representative Jared Solomon’s office presented a citation from the PA House of Representatives to Albert. (Jared was unable to attend but stopped by PPH later that week to personally congratulate Albert) 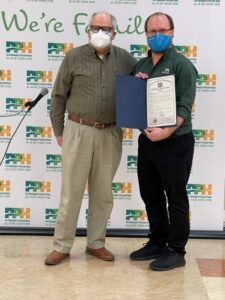 “Through his valiant efforts, a potentially tragic situation reflects most highly on him and will long be remembered and appreciated,” the citation reads.

SEPTA representatives were in attendance to thank Albert for his heroic, quick-thinking action.

“We never know how or when our Guardian Angels will manifest themselves, but on that cold, January morning as this man yelled out for help, you revealed yourself and changed the course of his life forever,” said SEPTA Police Chief Tom Nestel. 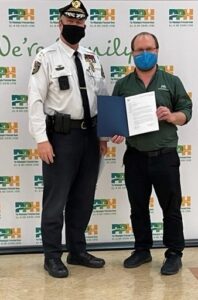 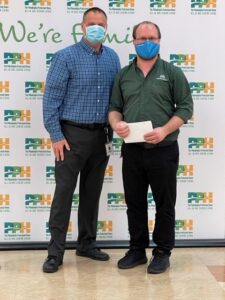 “I’ve known Albert almost five years and he always goes above and beyond for our residents. His heroic efforts did not surprise me,” said John.

As for Albert himself, he says he was just doing what he knew to be the right thing.

I’m glad I was there for that gentleman to pull him out of the track area and doing what I could do; a typical citizen just helping one another out,” he said, noting that it was an honor to be recognized. 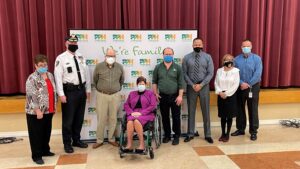