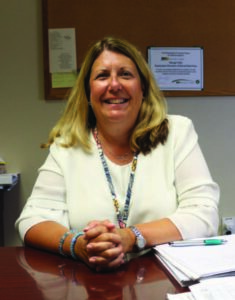 This past month, after passing her state and federal exams, Marge Felix, MSW, LSW, NHA, Associate Director of Social Services, obtained her Nursing Home Administrator’s License (NHA) from Penn State University. She worked diligently to complete the 120-hour course work virtually, while she was still working full-time at PPH. The entire PPH staff was proud of her, especially Vice President of Skilled Nursing and Rehabilitation, Jennifer Honeyford, NHA, CTRS, CADDCT, CDP. She was excited to celebrate with her co-workers, and thanked everyone for their support. When her NHA licensure was announced on social media, it was met with an outpouring of positive responses, congratulating her on receiving her license. We had the honor to interview Marge to gain insight as to how her new certification made her feel, and why it was a significant milestone in her career.

Marge has been working at PPH since 1993, where she started in Social Services. Interestingly, she was doing an internship prior to PPH, and made a lot of connections to return when a social services position opened up. One key connection she made was with her husband, Jim, who worked in the maintenance department at PPH at the time. She attended West Chester University, where her degree was in public health. In 2002, she returned to school to receive her masters at Temple University while she was still working at PPH full-time. The program was designed for people who worked full-time in the Social Service field, and attend classes at night. That gave her the necessary fortitude that she can juggle the work-life balance to receive her masters, so when she went to get her NHA license, she knew what to expect.

What inspired Marge to obtain her NHA license was a willingness to prove to herself that she could further her education while still working full-time. Additionally, what also inspired her was the overwhelming support she received from her coworkers, especially Jennifer Honeyford. This support would be vital in her seeking the challenge to receive the license.

When asked about how it felt to graduate, Marge stated that it made her feel accomplished, while also giving credit to her co-workers, whose support made it possible. “I had a lot of support. I didn’t think I could do it. It’s a challenging course load, and challenging tests”, said Marge. She was uncertain at first, but once the process continued on, she felt more confident that she would be successful, and felt on top of the world when she graduated.

Although Marge admitted that a lot of things, such as vacations, had to be put on hold in favor of school, her family understood that work and education come first, and she was grateful for their support.