Everyone Has A Story: John Bulovas - Philadelphia Protestant Home
loading...

Everyone Has A Story: John Bulovas

John Bulovas was born on March 22, 1918.  He attended Mastbaum High School in the Kensington neighborhood of Philadelphia, and after graduation, he worked as a machinist. 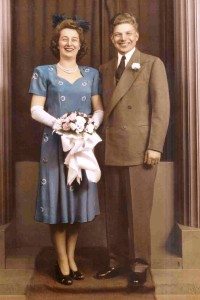 John and his wife Dorothy shortly after their wedding day.

On October 30, 1941, John was inducted in to the U.S. Army at Camp Lee, Virginia.  He was sent on a troop ship and landed in Europe on January 30, 1943.  On February 17, 1943, just over two weeks into his deployment, John was taken prisoner by the German Army.  He was liberated by the 7th Army under the command of General George Patton on May 3, 1945.  Three months later, he was discharged from the Army at Fort Dix, New Jersey.

On February 9, 1946, John married Dorothy Klopp, with whom he had two daughters: Barbara Van Horn and Suzanne Knorpp.  John went on to work for the Philadelphia Electric Company and retired from there after a lengthy career.  He has been living here at PPh for the past 18 years and we’re happy to have him as part of our family.  Thanks for your service, John!